Rank -- depends on the rank of v -- WHY IS THIS IMPORTANT?

Forms the composition (u@v) of verbs u and v .

The resulting verb is applied independently to each cell of the argument(s).

[x] is used to signify that the phrase holds good whether x is present or not.

Implement: f(g(x)) -- the mathematical composition of the two functions: f and g.

But see Rank in a hurry: an insidious rank problem for how and when these different methods give different results.

1. Phrase  (u@:v)"v means "apply v followed by u on each cell of the operand(s) independently". The rank of a cell is given by the rank of the verb v . The results from the cells are collected to produce the overall result of  u@v .

2. The difference between At (u@:v) and Atop (u@v) is shown in the first two columns of the diagram below. 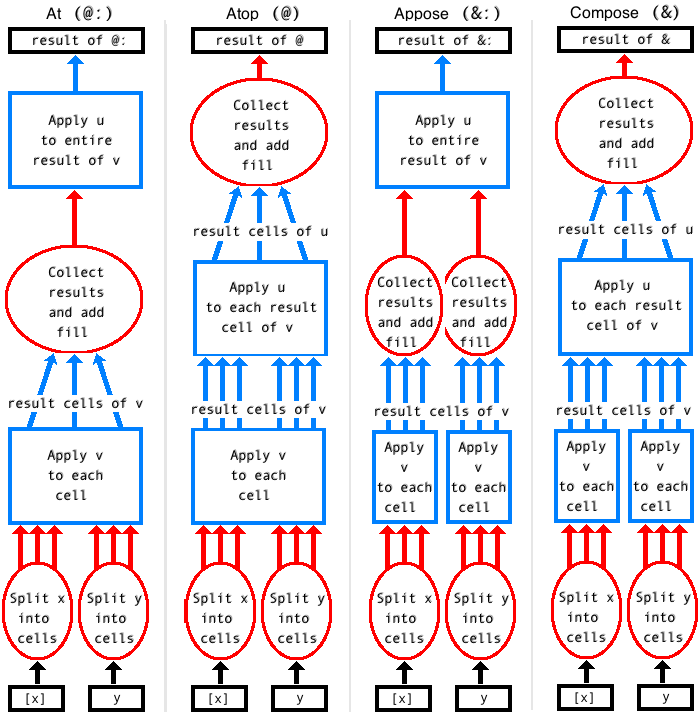 The above diagram also shows Appose (&:) and Compose (&) for overall comparison.

According to the J Dictionary -- &: is equivalent to & except that the ranks of the resulting function are infinite; the relation is similar to that between @: and @

The J Dictionary's definition of [x] u@v y as equivalent to  u [x] v y has caused much confusion, because the statement must be read in the context of the rank of v .

The precise definition is as above.